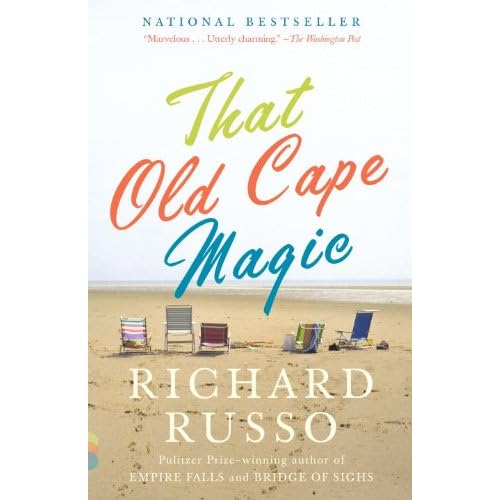 This is why I prefer to read dead prolific guys. I have just officially come to the end of the extant Russo canon. Now what am I supposed to do? Wait for another Russo novel to come out? Ph, wait. There is the short story collection, which I haven't acquired, yet. I guess that's my option, since history predicts several years between Russon novels.

I had a surreal moment while reading this book. In one scene the protagonist looks at the clock on the nightstand and it's 12:07 AM. After reading that sentence, I glanced at my own nightstand alarm clock and it was 12:07 AM. And there was nobody to tell!

The saying is that even a bad Russo novel is better than a good day at work. This was not my favorite, but I really began digging it in the last 50 pages. And then he pulled together all the various threads from earlier, and it felt good. The first 200 weren't bad, but I've enjoyed the early pages of other Russo novels more.

I had the thrill of hearing Russo read a chapter from this novel at the 2009 Texas Book Festival. Later I saw him preside over the first Austin Literary Death Match. Russo is a funny guy, somebody I'm sure it would be a blast to have a drink or five with. I'm thinking I want a Russo vibe for the Muffin Man project. We shall see.