When I started doing promotions of ebooks, I searched for free/bargain ebook websites and then spent 3 or 4 hours filling out the forms on about 30 sites to get maximum exposure. On some sites I also paid the fee for a guaranteed ad. After a few promotions I got tired of all the work and wondered if some of the more obscure sites were worth the trouble.

Of course there is a handful of sites that are known for performing well at present, such as BookBub, Pixel of Ink, and others. But I wanted to test the effectiveness of some of the smaller sites.

So, I did a 6-week experiment, pricing a book at 99-cents and then promoting it on a different site every 3 to 5 days, all the while tracking the sales daily. Based on the price, my cut was 35-cents per book. I started by sending out a newsletter to the fans who have signed up for it, then posted on Facebook and Twitter, and then the various sites.

There are several limitations to the experiment. First, it doesn't necessarily measure the strength of each site because a reader could subscribe to more than one site and sees it on one site first and buys, then doesn't buy when they see it on other sites. Also, some sites might be stronger in some genres and weaker in others. However, despite these drawbacks, and others, I think I can draw a few conclusions. Here's the chart, followed by a table of the data. 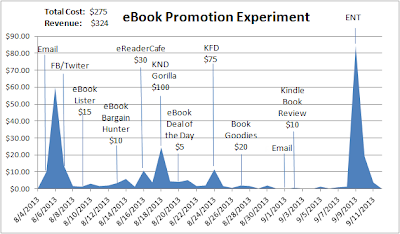 This tells me that my newsletter subscribers give me a better response than any of the sites I paid for advertising, including Book Gorilla/Kindle Nation Daily and Kindle Fire Department, which were the most expensive ads in this experiment. In fact, none of the ads broke even.

The thing that put the experiment into the black is that Ereader News Today picked up the promotion on their own, generating about a third of the total revenue. That was just a lucky break, but which tells me that ENT is reaching readers that the other sites are not if it can list the book after it's been on sale for a month and still outsell all the other sites.

My takeaway. Focus on my newsletter subscribers and the few solid performing sites and don't waste hours and dollars on the other sites. The other bonus is that I made $49 on the experiment and moved over 800 books to new readers who might go on to buy other books. But I'm glad it's over. ;-)