The Christmas Story (in art) (from RealLivePreacher.com) 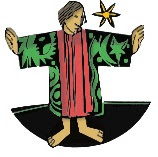 The other Christmas Story (and the wiki)

A bunch of Christmas Stories

And, if you missed them, you can watch 101 Christmas movies, TV shows, music videos, commercials and other stuff online here.

Did you know Santa Claus had a blog? Yep.

And the ever popular newspaper item, the Scared of Santa photo gallery.

YouTube slideshow of the South Florida pics with an annoying laughing version of Carol of the Bells soundtrack.

Posted by Brad Whittington at Monday, December 18, 2006 No comments:

Click the pic for a message from Mark Cloud. Make your own and post the link in the comments.

While you're there, mouse down to the Office Max tab at the bottom and check out the other Holiday Hilarity. Some are lame, some are cool. There's a better Shake the Globe and North Pole Dancing has its moments. For total random content, check out Holiday Greetings from the North Pole. My favorite is Don't Shoot Your Eye Out.

Nod to: Kelly, who may be shouting out, but not with glee, since her kids found this site.

I've been sitting on this one for months, as other topics have bubbled to the top. But now that the new Bond movie is out, with a 5 minute parkour sequence after the opening credits featuring Foucan, it's time to release this one into the wild.

Parkour is the art of running, jumping and climbing all over the urban landscape like a monkey on crack. The name is based on the French word for "obstacle." Invented by childhood friends Sebastien Foucan and David Belle in France, it has become a philosophy, an art (in the way martial arts are an art) and the subject of tons of amateur videos. You can find dozens by searching on "parkour." Here are a few for your amusement.

I like this one. There is an earlier BBC commercial with David Belle, but I haven't found it available on the Net.

This has what many parkour videos are lacking, a motivation for running around. It's from a French movie. Probably one of the best I've seen.

Because of all the stopping to do back flips off things and what not, this is not considered true parkour, which features smooth movement naturally adapting to the landscape. I include it because it is the first video of the genre that I saw about a year ago. These Russians develop a mood, but I could do without the psychotic video editing.

Posted by Brad Whittington at Monday, December 04, 2006 No comments: