The Biblical Approach to Alcohol * 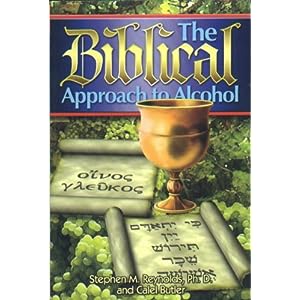 These books are starting to wear on me. That's the danger of reading books by preachers. They have no interest or experience in expressing an idea with an economy of words. In addition, this book needs a good going over for organization. It seemed to be a list of vignettes thrown down as Reynolds thought of them in random order, which made it more difficult to build a solid understanding of the larger picture.

But there were several things that stood out for me and made me think, "You're serious about this? Really?" How about this quote:

"God left a number of things somewhat difficult to perceive as a test of spiritual perception of Bible readers. [Section about Jesus being the Messiah.] In the same way God may have left His true teaching concerning alcoholic beverages with what the undiscerning find to be ambiguities. This may have been with the view of separating the spritually perceptive (those whose ears are attuned to the true testimony of the Holy Spirit) from those whose perceptions are made dull by some sin which they cherish. Such a separation of those who take advantage of paradoxes in order to indulge their fleshly appetites may be used by God in judging man."

Really? You're saying God intentionally inspired an ambiguous message on alcohol so he could jerk believers around as a test to see who is really serious? Here's another passage 80 pages later:

"He may have left the teaching concerning the command to total abstinence somewhat obscure as a test to determine who among those who profess to believe in Him would discern His true meaning. Some, understanding that alcoholic beverages are a Christian liberty, overindulge themselves to the point of total ruin; others become soft and flabby in their Christian warfare; others who are teachers of religion mar their record by giving the people who follow them bad instruction. In the end God accomplishes His purpose of sorting wheat from chaff, and in grading how much each servant made from his talent, or talents."

God uses intentional ambiguity on the subject of alcohol to separate the wheat (saints) from the chaff (damned)? This gets even more absurd when, as we see later, that even people who agree on total abstinence disagree on the meaning of specific uses of the original language. And notice the repeated use of "may" in both passages, which leads me to the next complaint.

While these books frequently make good points, many of them don't seem content to leave it at that, but seem compelled to descend into speculation to drive the point home.

For example, regarding the miracle at Cana, Reynolds speculates that Jesus and Mary arrived late, and that unlike Mary, Jesus perceived that the crowd was drunk. He says this explains why Jesus reacted with outrage when Mary suggested he help out the steward with his wine problem. He also speculates that Jesus left quickly after creating 180 gallons of grape juice because he wouldn't hang out around drunk people.

Honestly, how can you take a book seriously when the author just makes up crap out of whole cloth and presents it straight-faced alongside serious research into the original languages? It destroys any credibility that might be left after the "God is jerking you around" statement.

I readily admit in WWJD that I'm no Biblical scholar and can't research back to the original languages. However, Bacchiocchi and Reynolds are Biblical scholars, so I paid attention to their exposition on the original words. I learned that there are two Hebrew words translated to wine in the OT, tirosh and yayin and one word in the NT, oinos. There one word translated to strong drink, shekar.

From Bacchiocchi I learned that tirosh always means grape juice. This was foundational to his position. On the other hand yayin and oinos sometimes mean grape juice and sometimes wine, depending on the context. And shakar always means fermented drink, except in one passage where it would be inconvenient if that were the case, so in that passage it means grape juice. He goes to great lengths and many pages to talk his way around this one exception, even though it seemed to me, the complete doofus in Hebrew I admit, that it was more handwaving than substance.

On the other hand, from Reynolds I learned that all of the words, tirosh included, can mean either wine or grape juice. The fact that tirosh could swing either way was very important to his point. So I'm left thinking, if these two scholars can't figure it out, what hope do I have of coming to a solid conclusion based on the original languages? Is God really going to judge whether I'm wheat or chaff based on whether I figure out what these two scholars can't agree on?

These two also seem to enjoy engaging in circular reasoning, which occurred repeatedly in both books. One example goes like this:

You see the problem here? In step three we have the problem of deciding which references mean wine. We solve that problem by assuming that if the reference is negative, it means wine. But that is begging the question, assuming the thing we're trying discover, which is what is the attitude of the Bible toward wine. So the exercise is completely useless.

Overall, there were some diverting sections, but much of the book was less than helpful. And, like Bacchiocchi, Reynolds takes a lot of space to talk about medical implications and social issues and several other things that have nothing to do with the scriptural position.

Email ThisBlogThis!Share to TwitterShare to FacebookShare to Pinterest
Labels: *

It appears that Reynolds perceives that he has arrived, that the truth is his, and he's proud of that fact. If you can't grasp it, well then, in the words of Ce Lo Green, "forget you". Very tiresome.

Interesting way of parsing what I perceived as logical fallacy. Perhaps one a function of the "true believer" syndrome is that it transcends reason. Ha!

Yeah, you were gracious by just addressing the bad logic. I went for the spiritual jugular.