Drinking With Calvin and Luther!: A History of Alcohol in the Church ***

*** Drinking With Calvin and Luther!: A History of Alcohol in the Church, Jim West, 2003 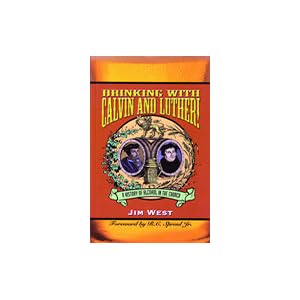 I've been looking for a credible history of the attitude of the church toward drinking and this is probably as close as it's going to get. It starts with the reformation, assuming that up till then the Catholics were in charge and obviously in favor of drinking. However, I read some quotes in other books dated from the 4th century which indicate that there were abstainers and prohibitionists from early on, so the dark ages are still in doubt.

All that aside, it appears that Protestant denominations took a turn toward teetotalism in the mid 19th century. Before then things weren't quite so extreme. In fact, I learned that bourbon was invented by a Baptist preacher from Kentucky, Elijah Craig! (It's pretty good stuff, too.) Rev. Craig was in his thirties during the Revolutionary War. He was ordained a Baptist preacher in 1771 and in 1789 founded a distillery.

It's an interesting book, primarly devoted to stories of theologians beginning with Martin Luther. The section devoted to analysis of the verses makes some good points, but lack the obsessive deep-dive into the languages characterized by Patton's work.