*** Bible Wines or the Laws of Fermentation and Wines of the Ancients, Rev. William Patton, 1871 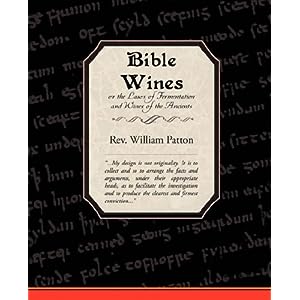 It was clear from the title page, which indicated this book was published by the National Temperance Society, what I would find inside. However, despite the fact that it was written 140 years ago, I found it refreshing in many respects, particularly this sentiment from the introduction from which other writers in this review should have taken a cue from (emphasis mine):


"My reasonings are conducted in candor, and with due respect to those from whom I am constrained to differ. Their views are carefully stated in their own chosen language, and their quoted authorities are fairly given. When their relevancy is questioned or their inferences shown to be illogical, no suspicion of motives has been allowed. Truth gains nothing by asperities."

Despite the fact that this book is older than all the others I read by over 100 years, it was the most compelling for the case of abstinence. It's not easy to read, but I recommend for anyone who wants to dig deep in this subject. I'm not completely convinced, but this honest and respectful approach is far, far better than the snarky arguments of 21st century writers.

My take: WWJD
Posted by Brad Whittington at Thursday, February 09, 2012

I was hoping it was recipes. If you find the bible tips for kicky wine from mustang grapes, let me know.

Thank you for the chuckle. Rest assured if I come across such a resource, I shall endeavor to convey the news to you post haste.