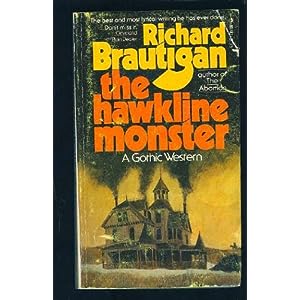 I'll give you the good stuff first. Several good turns of phrase and it was short, so I didn't waste that much time reading it.

I don't remember who recommended this book to me, so I can't hunt them down and thrash them severely about the head and shoulders with it. Plus, it probably wouldn't do any good, anyway since it's a lightweight paperback.

I've been familiar with the name because of the book Trout Fishing in America, but never read any of his stuff. Based on this sampling, I won't read another anytime soon. The cover blurb says The Hawkline Monster is "by far the best-selling of any of Richard Brautigan's books." OK.

While there is the occasional serendipitous turn of phrase, such as "[she] slipped like a grape peeling off her horse and into the arms of the woman," most of the writing was unremarkable. Much more telling than showing. Weird and quirky things seemingly tossed in randomly to artificially inject interest. Development of a whole plot line that is abandoned without explanation. Using the ability of the monster to manipulate thoughts to inject gratuitous, unmotivated sex. Random complications shoehorned in to delay forward momentum, evidently to build suspense, unsuccessfully, in my case.

And, when you come down to it, just a dumb storyline. Perhaps I'm a philistine, but I'm not seeing the genius, here.

Email ThisBlogThis!Share to TwitterShare to FacebookShare to Pinterest
Labels: *