Behind the Scenes: Postcards from Fred 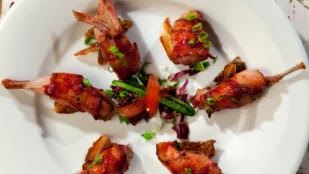 On my birthday in 2013, as we made a dinner of the lovely happy hour specials at Jack Allen's Kitchen, (bacon-wrapped Texas quail, barbacoa stackers, and smashed guacamole with pumpkin seeds), The Woman and I celebrated the pending release of Endless Vacation. Releasing a novel into the wild is a significant effort and requires acknowledgement via suitable celebrations.

As I told her of my plan to write and release Open Season by October 1, she looked on with unmitigated horror. First off, I have generally taken a year per book, sometimes longer, and she was imagining the state of the household if I tried to do a book from scratch in six months. Second, this was a completely new project in a completely new style, a risk from both creatively and in terms of branding. Third, and probably most important to The Woman, she wanted another Fred book.

And of course, she was not alone in this desire. Many fans had importuned me for an addition to the canon.

The problem was that when Escape from Fred released in 2006, I meant it as the final word on the subject and had no intention of returning to Fred, at least literarily. However, The Woman can be most persuasive, especially during the Jack Allen happy hour specials, and she pulled a zinger out of her bag of tricks.

"What about the postcards?" she asked.

"The postcards?" I replied with a certain sense of incredulity that she would drag out this old chestnut. "We've hashed this out many times. There is just no way to market the postcards."

"But what if you use them in a Fred story?"

Of course there was a catch. It was limited to a one-year contract and it was in a town 1,000 miles away. I would have to quit my current job, all three of them, and move to another state. At the time my kids were in high school: one a freshman, one a senior. I told the guy it was a tempting offer but I couldn't leave my wife behind to face two teenagers alone for a year. Then I called The Woman and next thing I was packing a suitcase to live as a bachelor for a year.

A month into the gig, reality began to set in for The Woman and I knew I had to do something drastic to keep her out of the psych ward. So I went to the post office, bought a jumbo pack of blank, pre-stamped postcards, and sent her one a day for the rest of the year. 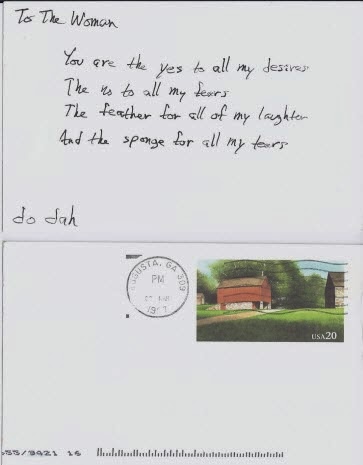 Yes, I sent one postcard every day the mail was delivered for eleven months. Two hundred sixty four cards. Two-hundred sixty four blank cards I had to fill up with something. I started off with the sexy quotes from the Song of Solomon and such, but eventually I ran out of verses and had to create new content. I wrote in my apartment. I wrote in restaurants. I wrote in bars listening to jazz or blues. I wrote on the plane traveling for my monthly weekend home.

The last one arrived in the mail the day after I moved back to Texas. The Woman slid it into the album she had acquired for the purpose and at last she had the full set. 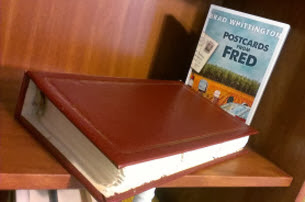 Yes, those postcards. They were the ones of which she spoke, attempting to seduce me into writing another Fred book. I cogitated on it for a while and came up with a plan. What if I wrote a series of short stories in which Mark Cloud solved the relationship problems of himself and others by ghostwriting postcards? It could work. And I'd wanted to write some short stories anyway.

So I mixed up my first-draft magic potion, went out on the deck, set the iPod to play Led Zeppelin I-IV over and over, and began. When I hit 20,000 words I realized I was out of short story territory and decided it would be a novella. When I hit 40,000 words I realized that I wasn't going to achieve my dream of writing short stories, or even novellas. All I needed was another 30-35K words and I’d have a novel. And so it was.

I used many of the original cards written back in the nineties, and also wrote new poems as the plot required. And it turned out to be the best Fred book ever. Of course, given I wrote it ten years after the first Fred book came out, it would have been unfortunate if it was the worst Fred book ever. I mean, I’d like to think I've learned a few more things about writing novels in the last ten years.

So, there you go. That’s the story of how, after seven years, the fourth Fred book came to be. And also the story of the postcards.

By the way, if you sign up for the BradNotes newsletter and send me an email with your snail-mail address, I'll send you an actual postcard postmarked from Fred. What's not to like?
Posted by Brad Whittington at Friday, March 07, 2014

How sweet! And romantic! And fun! (For your wife, if not for you, at least all 200+ times.) It's always a treat to know the "story behind the story," as it were.

I'd vote for yet another Fred book anytime you're up for that. ^_~