A peek into the process

On this blog I mainly talk about what I'm reading, not what I'm writing, and almost never about the process of writing. But I'm powering through the first draft of my next novel and I thought one or two of you, or maybe even all three of you, might like a peek behind the plywood barriers into the construction zone. If not, move along. Nothing to see here.

When people find out I'm a writer, many of them say they want to be a writer. My response is, "All you have to do is write." It's really that simple. If you write on a regular basis, you're a writer. You may be a bad writer, but you're a writer.

As James Scott Bell said a few days ago, "Many people say, I have a book inside me! Usually that's the best place for it." I would have stopped there, content to discourage the competition, but he continued with, "Learn the craft and write more than one."

I'm going to explain some of the mechanics I go through. This is not really part of the craft of writing, but it's something I use to keep track of my level of productivity, which is important when you're working on a deadline.

When I'm in first draft, I keep a log of hours and word count. It looks like this.

The first column shows the number of words in that session, then the date, start and end times, total hours, words per hour, then word count and hour count per day and per week.

You can see that in this period my words-per-hour ranged from 182 (on what evidently was a particularly bad day) to 500+, which is where I like to keep it. (I once got up to 800+ words per hour in the final chapters of the first draft of Hell in a Briefcase. Oh, those were the days!) Most serious novelists have a word count target for for the finished work and a daily word count target.

My routine is to set aside 2 nights a week and a significant chunk of the weekend when I'm working on a novel. As you can see from my journal, I'm not all that consistent, but I track my progress and if it gets low, like those two weeks where I only worked one day each, I kick myself into gear the next week. My goal is 8 weeks to a completed first draft. I started this novel on 12-18-09 with a 1-hour session of 330 words. My target is to be done by 2-18-10. I will cut myself some slack if I don't make it since I had to take some family time for the holidays.

I recently read a biography of P. G. Wodehouse, who wrote 90+ novels in his 90+ years. He was always very aware of word count and productivity. He did a daily 2,500 words or more during the bulk of his career, and when he was in his 80s and 90s, he still averaged 1,000 words a day.

I also track information on each chapter to try to get consistency in word count when possible, to make a note of what happens in each chapter, and a color-coded indicator that helps me in various ways depending on the project. Here's the chart for the first 16 chapters of EV. (The first chapter is numbered zero, so Chapter 15 is really the 16th chapter.) 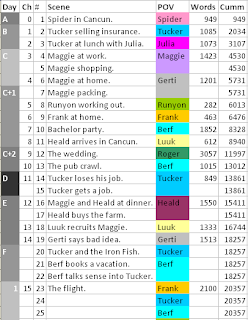 I like to keep chapters under 2,000 words because it creates frequent stopping points, making the book more convenient to read without losing track of the story. This project is in third person with multiple viewpoints, so I'm using color coding to keep track of which character perspective the story is being told from to get a sense of where gaps might exist in the narrative. You can see in the sample above that the first 10 chapters are told from 10 diferent points of view. That's kind of risky, but I think I can make it work.

In the sample below, you can see that the rainbow we had going earlier in the book has become less variegated. For nine scenes in a 3-chapter stretch, from 29-31, we only get two points of view. That's 5,000+ words, 17-20 pages of the novel. If I didn't have this chart, I would have to read through the entire book to get a sense of where I might need variety to break up long sections dominated by one or two characters. With a chart like this, I can see potential problem areas in a glance. 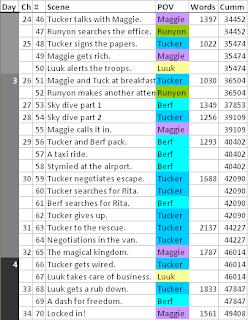 When working on my first four novels, I color coded plot lines rather than POVs, but for the same reason. If I saw a long gap where a particular subplot was not addressed, I knew I had to work in a scene to keep the plot going in the mind of the reader so they wouldn't see it pop up 100 pages later and think, "Wait, what was that about? Who is this guy?"

There. That was a bit long, but perhaps a few found it of interest. It also shows you how much of a writer geek I am and how much I obsess about this stuff. Yep, I'm a geek and I own it.

Email ThisBlogThis!Share to TwitterShare to FacebookShare to Pinterest
Labels: craft

3rd times a charm...posting pre coffee: Yes, geek came to mind but in that "it got you someplace, so what's the harm" Steve Jobs/Bill Gates kinda way.

a lot of work to make writing look like actual work... Everybody knows writers are just like housewives with their soap operas & bon bons...nice try.

True, it does make it look more like actual work. Writing well is hard, but that's not the same as work. How can it be work when it's so much fun?

I think that's awesome. Thanks for sharing your strategy. As a freelance engineer, I do a similar thing like your spreadsheet - well, I have to so I can write the invoice for my time!

I always thought writers had great memories. Hmmmm. Maybe I could write a novel... :)

Milester! Novelists don't have a good memory, they can just lie convincingly. I bet you're a natural. Ha!

Ya, and if caught in a lie, the bad memory is to blame. I know how that works!